Jackie (Monica Raymund) attends the party, although she hasn’t really bothered to dress up.

Upon entering, she runs in her roommate, the fabulous Fred (Francis Jue) who is peacocking with his inflatable rainbow. She doesn’t stop, though, and just sinks below the party to score some magic dust from Richard Simmons/Greg Giratoli (Dustin Lewis).

For the drug buying scene, it shot under Crystal Pier, which is attached to Oceanic.

This actually was shot around Halloween, conveniently, and was filmed at Oceanic in Wrightsville Beach. I was thinking about answering the casting call for this one, but didn’t want to trek all the way down to Carolina Beach again. It was only afterwards that I learned from a friend that worked that scene that it was at the beach only 6 miles away from me. Had I known, I would have submitted. Looked like fun. Oh well.

Sequentially, this is the first location within the Wilmington area to appear in Season 2. It is at the Carolina Beach town hall building, the same exterior location used for Ray’s reinstatement appeal later in the episode. The Recreation Center building is directly behind this, within and on the second floor, is where the AA meeting was held.

This was filmed on October 27th, 2020. I know this because it was the one day that I worked on this show, appearing as a silly head in the audience. I had been given an action from the director to pour a coffee (it was just water) and move across the room to sit down. I had to repeat this action and reset the coffee take with each take. I was to be the one that wasn’t already seated when Jackie started talking, so I naturally moved a bit quickly to my seat. The director asked me to slow it up a bit, and now that I’ve seen the finished product, perhaps the idea was that I would still be walking to sit down when they cut to the audience.

I was also visible as a blur wearing a blue shirt behind Vince (Phil McGlaston) when Jackie gets some coffee after her speech. Vince appears in 5 episodes of Hightown, with 3 in the first season.

During this shot, I was grouped with the woman in the knee-high boots (who went by a single name) and another person who isn’t visible in any shots, but he had me laughing between takes. It was his foray into background acting, and he was holding his coffee cup at really weird angles, on account that it was empty. It had me laughing as it reminded me of a scene from Bojack Horseman in which career-gal Melodie (Marcia Gay Harden) keeps moving her coffee cup in ways that it shouldn’t be. I had to pull up the clip for him when we were done for the day.

This entire scene is filmed in Provincetown, MA, not in the Wilmington area. 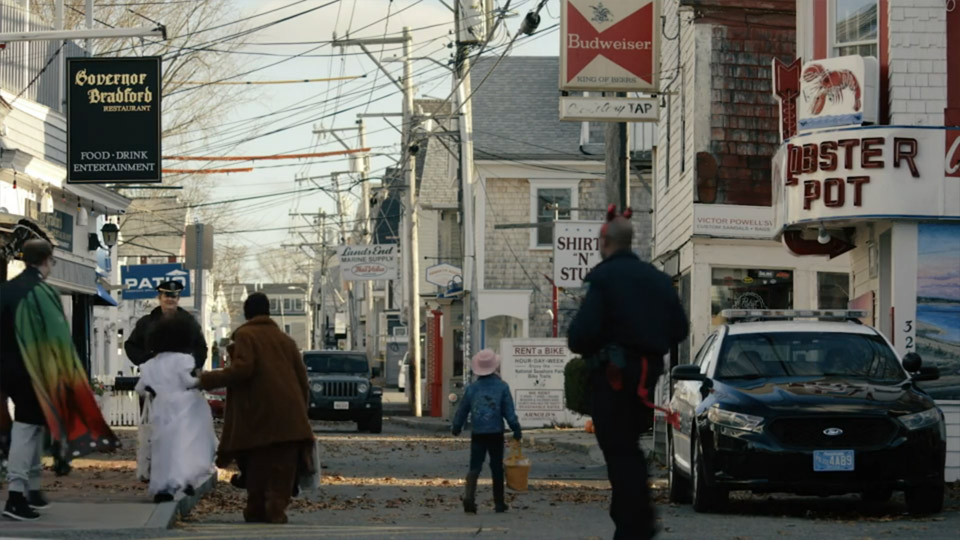 Chief Shellenbach was in the pilot, and the season 2 opening, but never to be seen again… (© Starz)