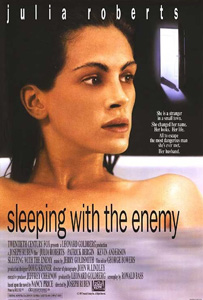 Julia Roberts suffers at the hands and whims of her abusive husband Martin (). She fakes her death and attempts to create a new life for herself, but she left clues behind that make it quite apparent that she was still very much alive. Her husband comes to collect her, and you can guess what happens as a result.

Shot partly in the Wilmington beach area, and partly in South Carolina. The majority of the film actually wasn't filmed here, but all beach scenes were. There are no existing locations in the Wilmington area that you can visit, but that shouldn't stop you from having some fun on the beach anyway.

I assumed this was Figure Eight Island, which is on the opposite side of the channel from the northern tip of Wrightsville Beach where Shell Island Resort is. Source on IMDb and elsewhere claim it is at Shell Island Resort, but it’s not—or maybe it is. I don’t know, there is a lot of conflicting information. It’s near, but you can’t access Figure Eight Island anyway as it’s private property, so it’s the closest you can get in public areas.

I did some digging on this and found a wonderful article written up which explains so very much more than I could have hoped, and provides real amazing information such as that the production built the house from scratch for this movie, but only half of the house. The two following photos are from someone named Mike who provided it to the

This is similar to how Under the Dome build a house which catches fire, but it’s only a façade with walls missing and no insides. At least with this structure in Sleeping with the Enemy, the interiors were within the half of a house.

According to the article linked above, the production demolished the structure and removed all traces of it once the production was completed. What I do know from living in this area a while is that at one time the ocean was hitting Shell Island Resort when the tide came in, and it was closed until a dredging operation could be done to rebuild the northern end of Wrightsville Beach. I remember going to the roundabout and the channel waters were feet from the road. Now, it’s extended outward quite far and the Shell Island Resort is open again. With that said, the area that they build the structure could have turned in to the channel at some point.

When Laura (Julia Roberts) sneaks off to a new life, she sets up in a small town in Iowa and assumes a new identity as Sara. There she meets a better, but aggressively forceful, man Ben (Kevin Anderson) which makes her uneasy with everything she’s been through with her abusive husband Martin (Patrick Burgin).

At this location, there are establishing shots, as well as a parade scene. This is not in Wilmington, nor in Iowa, rather it is a small town in South Carolina named Abbeville, some 250 miles due west as-the-crow-flies. It’s much closer to Atlanta, Georgia, which is some 115 miles west of Abbeville.

Ben (Kevin Anderson) whisks Sara/Laura (Julia Roberts) off to the theatre he has access to as a drama professor. There, he enchants her with some swinger action before dumping his load of snow all over her hair and face. It was truly a magical scene, but destroyed with a montage of way too many hats being jammed on her head.

I hadn’t even realized it, it was framed so tightly that not much was given away, but a comment found on another filming location website stated that this was shot at Thalian Hall. Given that so much of this film was shot in Abbeville, South Carolina, I assumed this was shot there as well. But I noticed that the brief glimpse of Ben shows columns and doors which match with Thalian Hall.