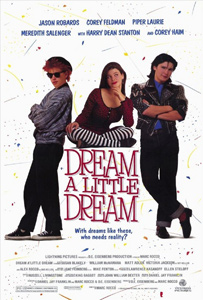 It's a Tale of Two Coreys.

During the opening credits, Coleman (Jason Robards) dreams that he’s performing onstage, singing “Dream a Little Dream”—or at least lip synching to it.

An interesting note about this shot, it’s a long take, a continuous (or appears to be) shot which begins with Coleman before an empty theater, but when the camera comes back around, the theater is packed. People must have had to lie on the floor and pop up, or, all rush in while the camera was not on them. Neat shot, too bad it probably doesn’t get much notice. Well done, Marc Rocco.

This is filmed within Thalian Hall, which has a long history in Wilmington. I personally attended the Under the Dome premiere there, which Stephen King was hosting. I sat near Josh Carter, who played a fireman named Rusty, who played Linda’s (Natalie Martinez) boyfriend trapped outside the dome. It’s a venue for live performances, special events, and has movie nights as well.

Across Princess Street is the New Hanover County Courthouse which the exterior was used in FOX’s Sleepy Hollow as the Sleepy Hollow Police Station.

The house of the Coleman Ettinger (Jason Robards) and his wife Gena (Piper Laurie), as seen from the front and also from the behind with New Hanover High School behind it. The alley that the gang wanders down throughout the movie is just behind the backyard.

At 13th and Princess, the other end of the block from Coleman’s house is where Leanie bikes back home from dance class at school, before then turning into Coleman’s front yard into the backyard. She is seen biking past these same three houses repeatedly (5 times, I counted), but from different angles to give the impression she is biking past several different houses.

The Alley Behind Coleman’s House

Used several times throughout the film, initially it is where the gang originates from before they traipse through Coleman’s (Jason Robards) yard and flowerbed.

It’s actually behind the location for Coleman’s house, which is also right across from New Hanover High School, the school they attended. Most of the cast walked down this alley at one point in the movie.